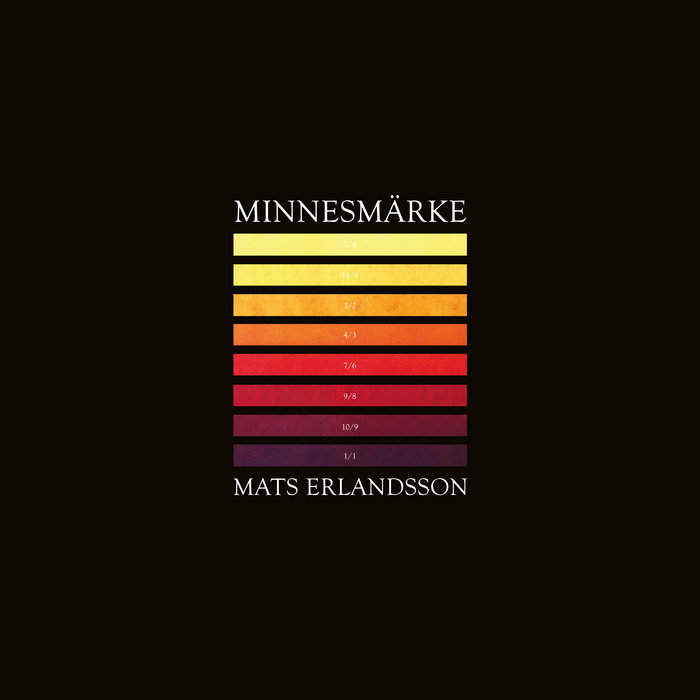 Mats Erlandsson makes his debut on the Swiss label Hallow Ground with »Minnesmärke,« at once a nuanced sonic exploration of the industrial and political history of his native Sweden and a deeply personal album. One of the key figures of the Stockholm drone scene, the prolific composer worked with The Kilimanjaro Darkjazz Ensemble’s Hillary Jeffery, violinist and long-time friend Gaianeh Pilossian as well as sound artist and frequent collaborator Yair Elazar Glotman for a two-part composition built around tuned sustained tones performed by electronic and acoustic instruments that were combined with field recordings in order to evoke a psychedelic state of reflection, a dream-like elegy for the acoustic properties of the former iron ore mine Ställbergs Gruva where the music has been conceived and recorded. Following up on releases on labels such as Hallow Ground label mates Kali Malone and Maria W Horn’s XKatedral imprint, »Minnesmärke« is Erlandsson's most accomplished work yet.

Originally a commissioned work by the Non Existent Center for a month-long artist residency in Ställbergs Gruva last Summer, »Minnesmärke« conceptually picks up on the socio-political and economic history of the Bergslagen region where the mine is situated. After mining operations had been on-going for decades prior, in the Industrial Age iron became one of the country’s largest exports, making the mining industry an integral part of the country’s progression towards a socialdemocratic welfare state in the years after World War II. With the rise of neoliberalism and the simultaneous erosion of the welfare state however, the mines around the region started closing, which resulted in the surrounding community losing its relative prosperity. Erlandsson’s interest in this story though does not exclusively stem from the historical significance of the mine, that has been re-opened in 2012 as a centre for cultural activities and critical thought. In fact, his grandfather was born and raised in the vicinity of it and thus his life - and, by extension, his grandson’s - was inextricably linked to its fate and the ebbs and flows of the industrial development in the area.

It’s no surprise then that the two parts of »Minnesmärke,« which translates to »memorial« or »monument,« is marked by a sense of dislocation and dissociation. »Working in Ställberg was a somewhat surreal experience from the point of view of a musician some one hundred years later,« says the artist. »Being in that environment makes you view time from the side - since the place remains the same it accentuates the deep chasm that separates my perspective from those of my relatives, while at the same time providing a form of intimacy with them.« This naturally shaped the recording process, which saw Erlandsson create an interaction between the acoustic and the electronic, the human and the machinic as well as the natural environment and the technology that has shaped it as much as it has been shaped by it. A combination of synthetic and recorded sound sources was processed by reamping it in various rooms of the vast mining complex. The resulting hybrid field recordings were transferred to tape and have then been treated extensively. An arrangement for Pilossian’s violin, Jeffery’s tuba and trombone playing as well as Glotman’s parts on double bass were recorded separately and similarly manipulated to create an expanded chamber ensemble with a wider range and an ability to transcend the usual temporal bounds of the instruments.

The outcome of this intricate working process calls to mind Phill Niblock’s most dense compositions, the iconic yet subtle work of Pauline Oliveros in the field of deep listening or even Jóhann Jóhannsson’s evocative examination of similarly politically charged topics on the »The Miners’ Hymns« OST amongst others. While Erlandsson shows his knack for creating emotive dynamics by bringing the acoustic recordings into a pulsating flow, the manipulated field recordings are used as a counterpoint throughout both parts of the composition, commenting on and fostering the ever-shifting dramaturgy of the record. Most importantly though, the 41 minutes are marked by a continuous tension that almost feels tangible. It’s the looming shadow of history, materialising in the form of a monument, a memorial for the past generations that have etched their hopes and aspirations into the walls of Ställbergs Gruva.